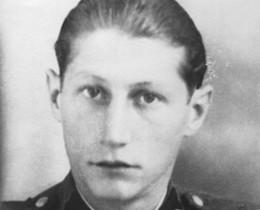 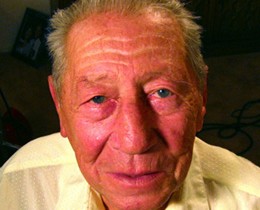 Photographed by Mitch Braff in February of 2002

Joseph Greenblatt was born in Warsaw, Poland in 1915. He learned about resistance from his father, an army captain who had fought for Polish independence during WWI. At eighteen, Joe enlisted in the Polish Army as an infantryman and became an officer in 1938. In 1939, he was mobilized and sent to the Polish-German border. He witnessed the German invasion directly and fought for almost twenty days before being taken prisoner and sent to a German POW camp. It was in the camp that he began to establish connections with the newly formed Armia Krajowa (AK). The AK hijacked a German truck that was transporting Joe to a hospital, freeing him and his fellow prisoners.

Joe returned to Warsaw, only to find the Jewish population of the city walled into a newly formed ghetto. Though they were imprisoned, the Jews of Warsaw were far from passive; underground resistance units had already begun to form. Joe used his army connections to amass a stockpile of black-market weapons. He also met and married his wife, the younger sister of a comrade.

In the spring of 1943, rumors of a full-scale 'liquidation' circulated. Joe and the other partisan commanders decided it was time to act. Disguised as Nazis, they attacked German soldiers as they entered the ghetto. Joe remembered how men from his unit threw a Molotov cocktail into a tank, destroying it and killing several Germans. Joe eventually escaped from the ghetto through the sewer system, emerging in the Gentile quarter. Hiding his identity with a Christian alias, Joe made contact with his old POW comrades and joined the AK. For a while, he worked as a member of the Polish underground, raiding a German train depot and aiding in the assassination of a prominent SS official. In late 1944, he was remobilized with the Polish Army.

When Germany surrendered, Joe was working as the commander of a camp of German POWs. After the war Joe went to work for the Irgun (Jewish paramilitary group in mandate Palestine) under the command of Menachem Begin, traveling between Belgium and Israel as an arms dealer.

In the late 1940s, Joe and his wife immigrated to the United States, settling in New York. Joe passed away in March 2003. 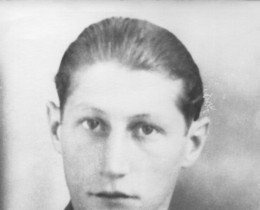