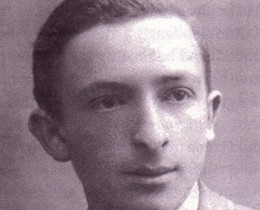 Shalom Yoran as a young man. 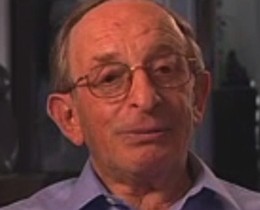 Shalom Yoran, (born Selim Sznycer) was born on June 29, 1925 and grew up in Warsaw, Poland. When Shalom was 15 years old, his family fled eastwards, leaving the Nazi-occupied area of Poland for the Soviet-occupied side. In June of 1941 the Germans invaded the Soviet Union. The Yoran family soon found their new home, the village of Kurzeniec, occupied by the Nazis.

Two years later the Nazis established a Russian POW camp in Kurzeniec, where prisoners were treated brutally. Shalom first learned about the partisans through rumors told to him by escaped Soviet POWs. The day before Yom Kippur in 1942, the order was given to liquidate the Kurzeniec Ghetto.

Shalom received an early warning about the liquidation, but his family wasn't as lucky. Hiding in a barn, Shalom listened as the remaining population of the ghetto, 1,052 people, were murdered. Shalom spent the frigid winter of 1942 in the forest near the San River, along with his brother and three friends. To survive the brutal weather, they built a zemlyanka (underground bunker) for shelter. For food, they lived off a large store of provisions they stole and begged from local farmers.

In the spring of 1943, Shalom located a partisan unit. However, because neither he nor his friends had weapons, they were not allowed to join. This was a common practice among non-Jewish partisan units.

Another unit's commander initially refused to let them in either. When they persisted, they were offered a deal: if they returned to Kurzeniec and blew up the factory that made parts for rifles, they could join. The Russian partisans considered it a suicide mission against the well-guarded building, but Shalom and his friends succeeded regardless. Returning victorious, they learned that the Russian partisans did not expect them to succeed and never intended to let them into their group because they were Jewish.

Determined to join the fight, Shalom helped form an all-Jewish unit with over 200 Jews. In the wake of the German defeat at Stalingrad, Shalom's unit harassed the retreating German troops, blowing up bridges and destroying railroads.

When Belarus was liberated by the Soviets in 1944, Shalom and his comrades were drafted into the Russian Army. Shalom was appalled by the brutality and political persecution he experienced. He eventually deserted and made his way to Italy, where he worked for the British Army until the end of the war. In 1946, he traveled to Palestine with the aid of a fake British Military passport, changing his name from Selim Sznycer to Shalom Yoran, and joined the newly formed Israeli Army. Though he later left Israel to attend an American university, he returned to become an officer in the renowned Israeli Air Force.

In 2003, Shalom published The Defiant, a memoir of his time as a Jewish partisan. To hear Larry King read excerpts from The Defiant, visit JPEF's Partisan Hideout page.

Shalom Yoran passed away in 2013 at the age of 88. He is survived by his wife Varda, two daughters, and two grandsons. 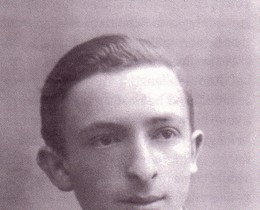